How Can A Snake Help You Reach Your Dreams?

Do you ever feel like your dreams are out of reach?  They’re just too big?  Or…too small?

They’re unattainable?  Not possible?  Kind of like picking up a snake?

And, speaking of snakes, would you pick up a snake if it was stretched across your path?

In fact, most people would run the other way, high footing it to safety.

Or at least involuntarily hop to the side, releasing a gasp of air or a high pitched scream.

And just to be clear…I am most people.

I have come across snakes before, screamed and high kneed myself to safety.  I’ll admit, I am curious about snakes, but only from a safe distance after I know they are not slithering in hot pursuit after me.

But this time was different.

I was on a run on the dirt roads behind my house and listening to Michael Hyatt be interviewed about “vision” by Donald Miller on the Building a Story Brand podcast.

The gist was that a company must have a VISION for where it is going if it is to be successful. (Yep!  I’m a business building podcast nerd…but stick with me…it gets exciting)

Thirty minutes later, it ended and I slowed down to a contemplative walk.

I pondered the question, “What is MY vision for Good Job Mom?”

I answered myself…“I want to help moms KNOW they are good moms.”

Then…another thought entered my head…“What if THAT vision isn’t big enough?  What if the vision is EVEN BIGGER?”

Which led me to an absolutely absurd thought.

“Someday, I’d like to learn how to pick up a snake.”

Where on earth did that come from?

I shriek, my heart races and I run away when I see snakes.

So WHY would I think I want to learn how to pick one up?

And it wasn’t like…I’d like to be at the zoo and have a snake handler gently place one in my hands.

No, it was more like…I want to pick up a wild snake.

But how odd!!!  Because unless you’re on a reality TV show, WHO DOES THAT??

And, for the record…I am NOT on a reality TV show!

The snake thought entered my mind about the same time as the what-if-the-vision-for-Good-Job-Mom-is-even-bigger-than-just-helping-moms-KNOW-they’re-good-moms thought did.

It was as if the snake thought was put there to demonstrate that the vision could be…should be…so big and absurd that it seems impossible.

Just like picking up a wild snake would be for me.

Seconds later, after I had put the learn-to-pick-up-a-snake thought on the back burner for some future (and I mean YEARS in the future) bucket list item and was pondering a larger vision for Good Job Mom,

A SNAKE WAS STRETCHED ACROSS MY PATH!!!!

It was as if God, the Universe, Mother Nature, Fate…whoever you believe in…put it there to say…

“See???  If you just believe, ask, and dream even bigger than you ever thought possible, I will come through for you!”

Now, granted, I have dreamed of a money tree, a huge check arriving in the mail, a new camper with no mouse holes in it before… and they have not shown up in my path.

But this was so absurd, so out of the norm of my reality that I just couldn’t ignore the underlying message:

…then pay attention, see the opportunity and conquer your fears to overcome the obstacles that get in the way of obtaining your goals, your dreams, your visions.

And I asked myself the unspoken question:

“If you dream about something…ask for something…have a dream…and it is set right in front of you…and the opportunity to accomplish it is right there…would you do it?”

I picked up the snake.

And I am currently figuring out what other big, absurd dreams, visions and goals to set.

Because it is now obvious to me that they are attainable.

So, I have two questions for you:

I'll send you the link to the Vision podcast by Michael Hyatt with Don Miller...maybe it'll help you find your snake. 🙂 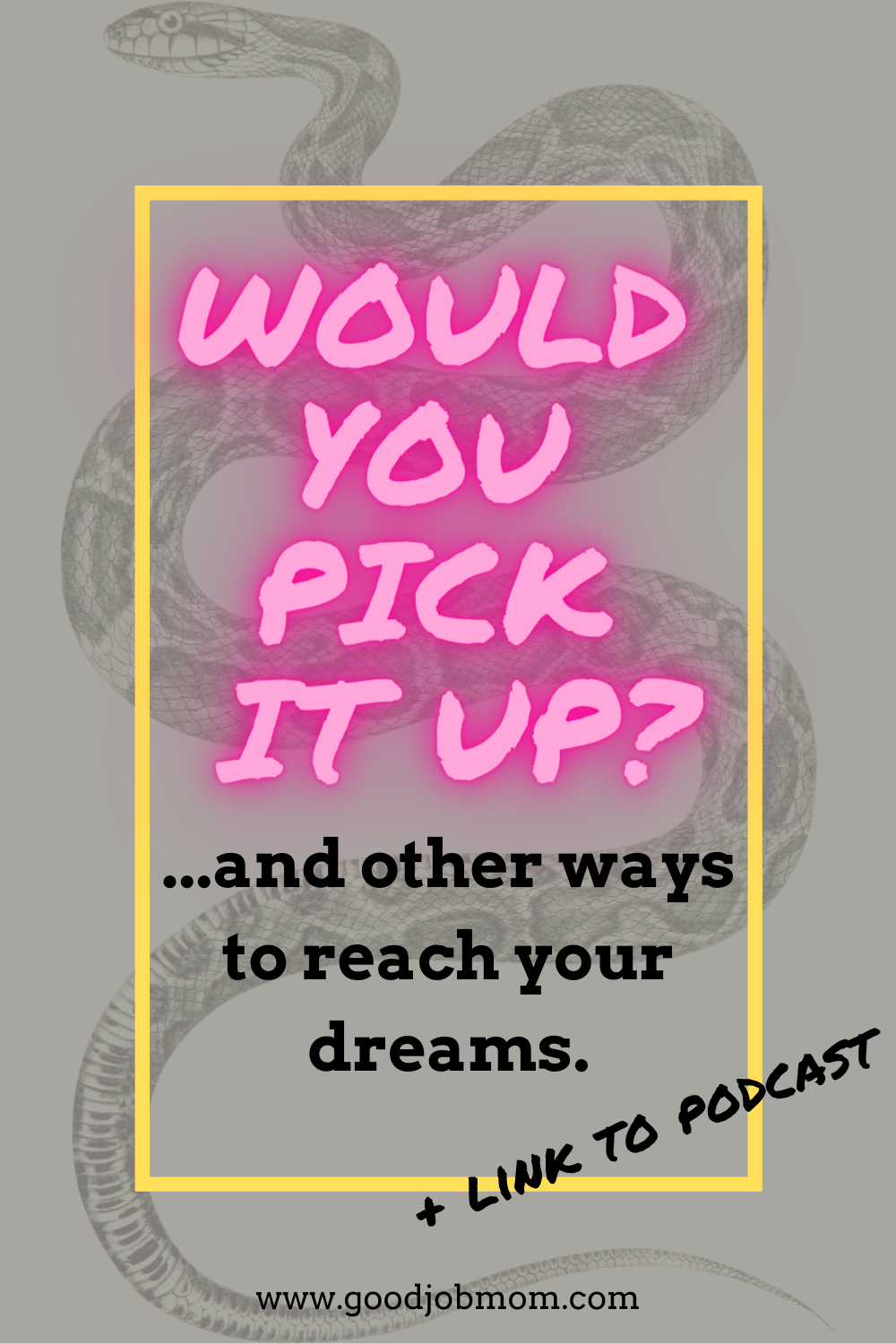 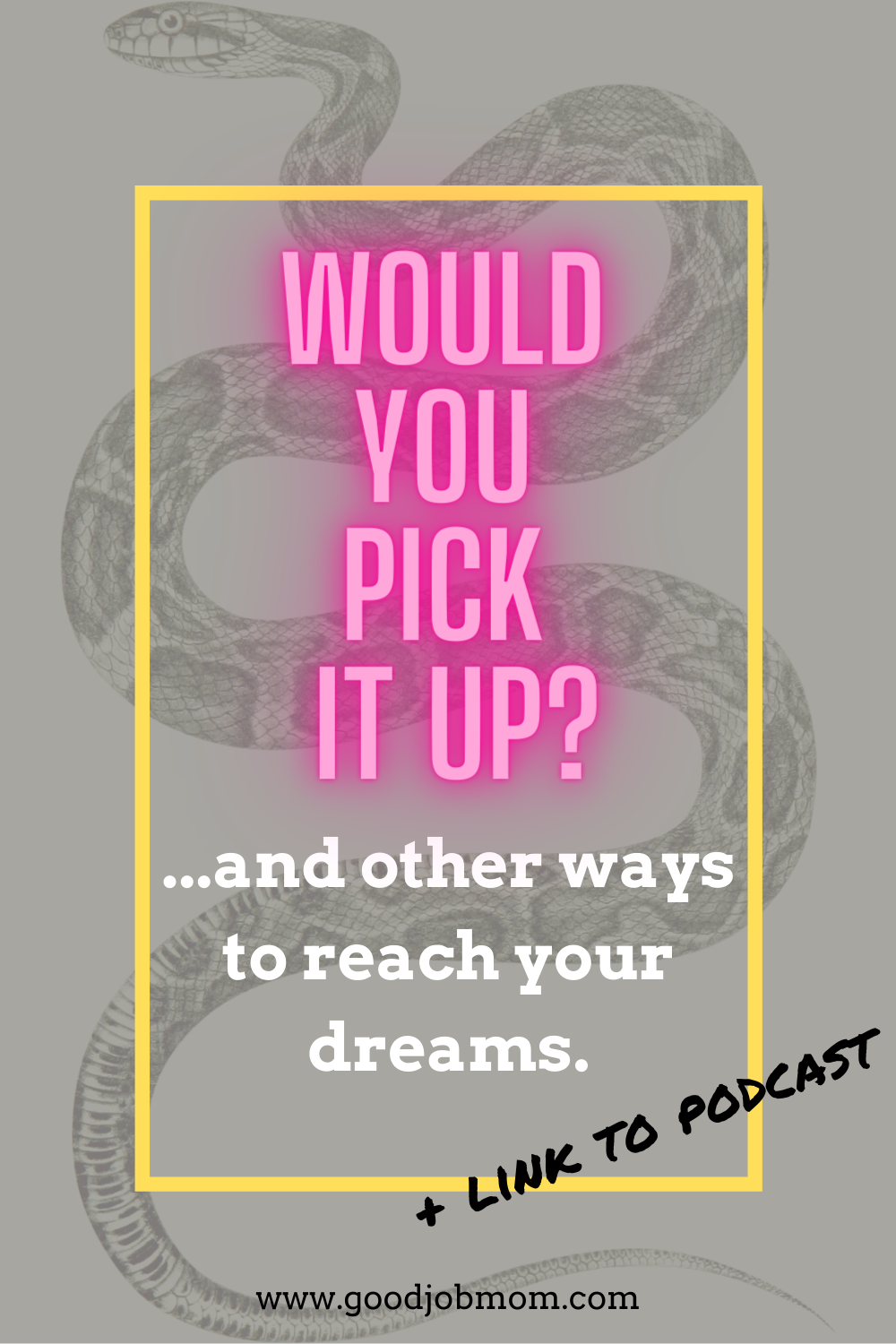